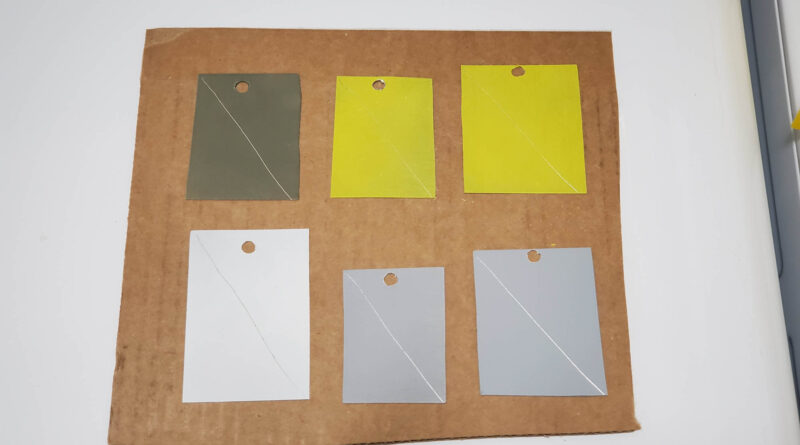 There seems to be a bit of debate about what primer, if any, to utilize while priming aluminum in experimental aircraft construction. When it comes to determining what is a “good” primer, two significant criteria are durability (scratch resistance, etc.) and corrosion resistance. Some primers are very well tested and have a proven track record, like zinc chromate based primers or 2-part epoxies. But many don’t wish to use either for various reasons and choose to use an easier aerosol (rattle can) primer. It is here that I will focus.

Some of the more common aerosol primers include NAPA 7220, SEM self-etching, Dupli-Color self-etching, Tempo, etc. While not aerosol, EkoPrime is another popular alternative single-part primer. For the most part, none of these are advertised to prevent corrosion and normally would require a top-coat. So, is it a waste of time to even prime with a primer that isn’t even meant to prevent corrosion by itself? Let’s find out.

Traditionally, a salt spray or salt fog test is conducted to test materials for corrosion resistance. This is normally done in accordance with ASTM standard B-117 that stipulates specific parameters for such a test. Since I do not have access to such a test apparatus to conform to these standards (nor a copy of the standards themselves since you have to purchase them), I’ve decided to build a unit that will be able to get roughly close to B-117 standards. I will utilize a sealed enclosure that will contain the test samples, an atomizer to create the salt fog and a 5% salt solution with temperature regulated at 95 degrees F (+/- 2 deg). Ultimately, I’m simply try to compare these primers under the same conditions.

Going head-to-head in this corrosion test will be:

Each of the aerosol primer samples were prepared by lightly abrading one side of the aluminum coupon (non-alclad) with a maroon Scotch-Brite pad and cleaned with acetone. The EkoPrime sample was prepared per manufacturers instructions utilizing EkoClean and EkoEtch. The EkoPrime sample had been sprayed on both sides of the prepared sample, while the others kept the reverse side bare aluminum, with the bare aluminum side receiving only a cleaning with acetone. Gloves were worn during these processes.

I acquired the needed items to build this test tank. The 5% salt solution was created by using standard table salt, 145 grams to create 2.9 liters solution. Hopefully my math was right!

Setting Up The Test

I utilized a yellow plastic container and a couple plastic straws to make a holder for the samples. Once the samples were hung, I placed them into the testing tank and turned it on. In the second photo you can see the salt fog starting. Once the tank lid is on and salt solution is up to temperature, the fog completely fills the tank. Test began 1:30pm on December 19.

On December 26 at 6:30pm, I removed the samples from the test tank after 173 hours of exposure.

Here are the samples after 173 hours of being exposed, both front and back sides. There is significant corrosion on the back sides of the 5 unprimered samples. A closer look is need at each one.

Dupli-Color: Overall it looks really good. There is some corrosion along one side that has caused the primer to bubble. There was no sign of corrosion along the scribe line.

EkoPrime: On both sides of the sample, there was noticeable pitting corrosion. It was more significant on one side than the other.

SEM: On one SEM sample (the two-coat sample), there was an area across the entire bottom with hundreds of tiny bumps, perhaps pitting corrosion. A finger nail scratch test easily removed the raised dots of paint. It was only along the bottom though, and virtually non-existent on the other SEM sample. No other issues noted on the SEM samples. Primer remained fully intact and great condition elsewhere.

Tempo: Some areas along edge had primer that looked like it was becoming loose and “bubbling”, tough those were areas that had been saturated with water. No obvious signs of corrosion though. (sorry, no pic).

To expose the bare aluminum under the primer coat, acetone was used to carefully wipe away primer on the left sides of the samples. Noted during this, the SEM and Dupli-Color easily were removed with just a couple swipes. The tempo was more resistant. The EkoPrime was by far the most difficult to remove, so much so that I was only able to remove a small section without spending too much time.

Pitting was observed on all samples except for Tempo. The areas of pitting on the SEM and Dupli-Color samples were isolated to the bottom of the samples. This also was the area of the samples that had become most saturated with the salt solution, either from occasional splashes or condensation and run-off of the salt fog. For those same samples, the areas higher-up in the samples that were primarily only exposed to the salt fog vapor showed no signs of corrosion. With regards to the EkoPrime, I did note a few spots of pitting corrosion and areas of discoloration throughout the sample.

It is my opinion, based on observed results, that there is no question that priming with any of the primers listed on this page will help prevent/reduce corrosion over a non-primered aluminum surface. The Tempo Zinc Phosphate did the best with no corrosion noted. It is also the only primer on this page designed for corrosion resistance and has been tested to 800 hours of proper salt fog testing, so that should be no surprise. In contrast, SEM, Dupli-Color and EkoPrime all did allow some corrosion to form, though minor in comparison the the non-primered back sides.

Another point to note is I did not use alclad aluminum. Much of the material used in RV aircraft construction is alclad and should give more corrosion resistance by itself.

In the end, this was just one test performed in a home-made setup by a non-expert (though engineer… probably more of a detriment!). Primer wars will surely still continue, but if nothing else, this test will hopefully give some perspective as to priming and corrosion.

Since I’ve decided to use Tempo, cheapest source I found with very reasonable/fast shipping:

This site uses Akismet to reduce spam. Learn how your comment data is processed.